I’ve seen this meme a lot this year: I’m sure you have too: 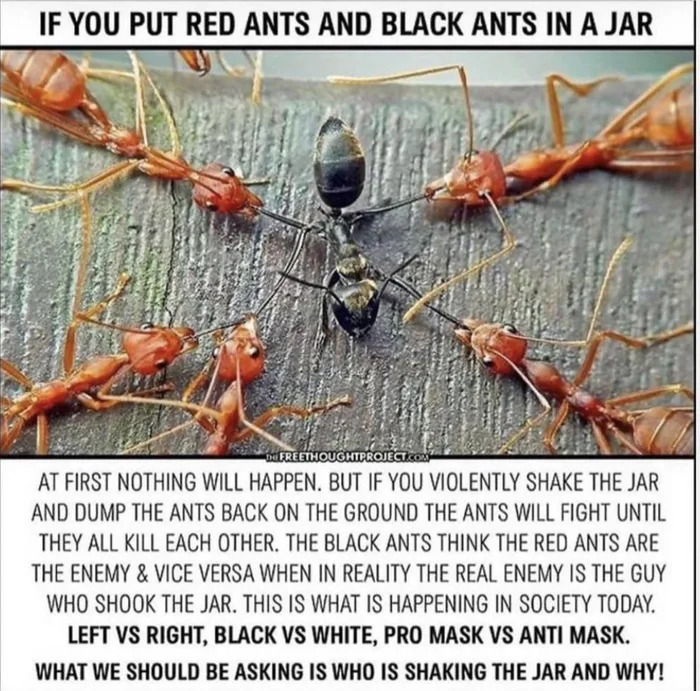 Is it factually accurate? I have no idea. It does strike me as the kind of “experiment” that was never actually conducted. Nevertheless, I’m pretty ignorant when it comes to ant behavior, so who knows?

But apart from entomological curiosity, the facts don’t particularly matter in this case. This didn’t become a meme because of some famous scientific experiment; it became a meme because it effectively illustrates something we’d all like to believe about human unity.

America is experiencing serious and increasingly violent division around numerous societal fault lines. In fact, I think many of us are perceiving that we’re actually on the verge of collapsing into either anarchy or tyranny depending on the day. And there’s no question that those fault lines are being manipulated and exacerbated. Politicians and ideologues alike seek to capture America’s imminent transformation so that they can direct it according to their own purposes. In other words, there is no shortage of enemies (both foreign and domestic) shaking America’s jar.

But are they the “real” enemy? If we take the experiment at face value, then why stop there? There are many more scenarios to consider, and the ramifications are far more illustrative than the original. Consider:

How do the ants react if, instead of someone deliberately shaking the jar, he accidentally knocks it over and it falls violently to the ground?

This is a pertinent question, for just as America has no shortage of enemies, neither do we have a shortage of fools. As the saying goes, “Hard times create strong men. Strong men create good times. Good times create weak men. And, weak men create hard times.” Americans have not grown more adept at creating stability in our society, but less.

So what happens? I think it’s a pretty safe bet that the ants will still kill each other. The ants don’t really care why the jar is shaking, they just know their world is thrown into chaos and will do whatever they can to establish a new order.

How do the ants react if the jar is violently shaken by an earthquake?

Not only must a nation contend with villains and fools, but also with disaster and unfortunate happenstance. America is being shaken by plague, by fire, by storm, by drought, and by every other evil that has plagued mankind since the fall. No society will ever be immune from such hardship and uncertainty.

So what happens to the ants in this scenario? Once again, it’s a forgone conclusion that they will still kill each other because the jar is still shaking. To the ant, the meta-scenario makes absolutely no difference.

How do the ants react if you first warn them that their real enemy is the guy who’s shaking their jar?

This is, after all, precisely the reason this meme exists–to warn us all about the villains tearing our society apart. So let’s announce as loudly as we can into the jar of ants that someone is going to shake their jar and that he, not the other ants, is the real bad guy.

So do you think the ants will heed the warning they were so graciously given? Neither do I.

I could keep going, but hopefully my point is becoming clear. There is an abundance of threat to this jar. Even if we immediately lynch every dubious experimenter who wants to try shaking the jar to see what happens, some idiot is going to bump it with his elbow and knock it on the ground. Even if we clear the laboratory of interference, nature itself is going to agitate the jar at some point. Not to mention the fact that these different scientists fighting over what to do with the jar are going to disrupt it themselves merely by their struggle. One way or another, that jar of ants is getting shaken.

So who, then, is the real villain in this scenario? Clearly it’s the idiot who tried to put two different kinds of potentially hostile ants into the same jar! They are going to fight. The only real questions are how long until they do, and which circumstances will lead to it. In short, the real problem is excess diversity in an enclosed space.  God deliberately created the nations; we don’t get to just undo that at our own whim.

Once again, there is no shortage of reasons this has come about. There is, of course, ethnic diversity to consider. Americans refused to pick our own cotton, encouraged the largest mass migration in human history, failed to enforce our own borders, and so forth. We’ve repeatedly shot ourselves in the foot in this respect.

But even apart from that, America has also divided herself religiously. Blood may be thicker than water, but our gods take precedence even over our flesh and blood. Now consider how often you’ve seen or experienced family members disowning one-another over politics, masks, and the like. The biggest religious divide in American is between Christianity and Progressive Politics–for that has become the de facto religion of many. And we’re only just beginning to understand how vicious the religion of Progressivism can be. Even those Progressives who wear the label of Christian won’t hesitate to turn on their ostensible brothers and sisters in Christ for defying their true god. The sheep will visit you in prison; the wolves will put you there.

Naturally, we’d all like to think that humans are better than the proverbial ants. Surely we can learn to live together in true unity amidst all the jar-shaking. History, unfortunately tells us otherwise. We cannot fix fallen human nature, no matter how much we might want to. Like communism, multiculturalism is an attractive image whose only real-world ability is to transform people into corpses. We should be just as dubious of “diversity will work this time!” as we are of “communism will work this time!”

As for America, our jar has already been assembled and shaken. If we have any hope at all, it is to deliberately reduce our diversity by means of amicable divorce. But as long as one faction or another still aspires to claim the whole for themselves, peace will increasingly become a stranger to us.

This entry was posted in Christian Nationalism, Culture, Musings, Politics. Bookmark the permalink.

2 Responses to The Ants’ Real Enemy?