I love conspiracy theories. That’s not to say I don’t take them with Jimmy Buffet’s lost shaker of salt; but any good conspiracy theory is, at the very least, a fun bit of alternate history. 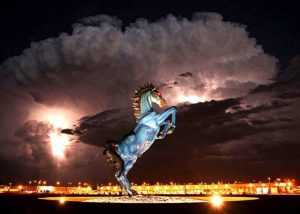 “Have a nice flight!”

But it’s not just the art. There are rumors of secret tunnels. The dedication ceremony apparently involved all sorts of Masonic rites. There’s also the mysterious dedication stone, which not only has a number of Masonic symbols, but also attributes the facility’s creation to the “New World Airport Commission,” an organization whose existence has no written record other than the dedication stone itself. We’ll cut the list short there, but DIA has plenty of appetizers for the imagination. This, of course, leads to some rather imaginative explanations for these facts—everything from alien landing pads to Illuminati bunkers.

And that’s the fun part of conspiracy theory: imagination. We all have various paradigms—ways we look at the world which we use to interpret our experiences. Naturally, some of these paradigms turn out to be false or deceptive. We realize this as we begin to notice things in the world that don’t really fit with a particular paradigm. That’s how we moved from geocentricity to heliocentricity—too many celestial observations didn’t really make sense if the sun revolved around the earth. But paradigms are a mental necessity. When one paradigm falls apart, we have to imagine another. And in the early days of paradigm shift, a lot of varied hypothesizing goes on. It’s not terribly strange that some of the hypotheses are going to be fanciful when the most mundane explanation is no longer on the table.

The problem with taking conspiracy theories too seriously, however, is that even in circumstances when we know the official story is untrustworthy, that doesn’t necessarily mean we can know what the real story is. The proliferation of different (often mutually exclusive) theories really underscores this. People who theorize about the JFK assasination all agree that the official lone gunman story doesn’t work, but the alternative stories are all over the place. The Onion’s book, Our Dumb Century has a great headline to this effect: “Kennedy Slain by CIA, Mafia, Castro, LBJ, Teamsters, Freemasons; President Shot 129 Different Times from 43 Angles.” 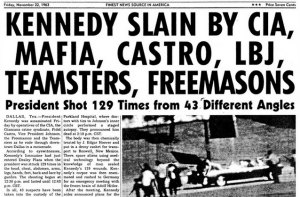 There are a lot of theories and no good way of determining their veracity. In the absence of verifiable facts, speculation rushes in to fill the void. And just like using real money makes gambling more addictive, taking conspiracy theories too seriously makes the speculation more enticing.

When you find yourself in a situation in which you believe that society’s ordinary investagative institutions are untrustworthy, deep investigations become extremely difficult. There’s only so much that one person can do on his own, and crowd-sourcing on something like this has its own inherent limitations. When it comes to the veracity of most conspiracy theories, there are three basic answers. The virtue-signaling answer is “That’s absolutely ridiculous and I’m not the kind of person who would ever believe anything of the kind.” The ego-stroking answer is “I’m one of the few elite minds who has pierced the veil of secrecy and discovered the Truth.” The correct answer is “I don’t know.”

Oddly enough, that’s also an entirely pragmatic response—even when it comes to epic stories of secret societies ruling the world. If there is one, it’s amazing how little it actually matters in your day-to-day choices. Most people don’t have the wherewithal to fight a global conspiracy. And if its a matter of distrusting certain people or institutions, well, it’s almost certainly the case that one believes a conspiracy because he already distrusted the people and institutions involved.

I’ve been thinking about the subject lately because I’ve been reading bits and pieces about “Qanon” and “The Storm” at Vox Popoli. The short version, if you’re unaware, is that there’s been an anonymous poster on 4chan & 8chan referred to as Q (hence Q + anon) who is supposedly a Trump administration insider with (of course) the highest of security clearances. He’s been posting a bunch of breadcrumbs that have been leading people to develop a new conspiracy theory with two key features: First, that there is a globalist Cabal intent on imposing its vision on the world through nefarious means (and is also deeply involved in rather nasty occult practices.) And second, that Trump’s primary goal as president is to expose and prosecute this Cabal in a way that will undermine most of our social & political paradigms (a predicted event referred to as “The Storm.”) There are certainly many more fantastical details, but those are the basics.

Whether or not The Storm is anything more than a wish-fulfillment fantasy, it’s certainly the perfect storm when it comes to conspiracy fodder. For one thing, Q’s posts are generally in the form of open-ended questions that are supposed to lead people in the right direction—the perfect format for engaging the imagination. And they’re posted in a community which makes free speech an absolute that completely dissolves any boundary–whether legal or simply social–so there’s no limit on where the answers to those question might go.

At the same time, we’re living in an era of paradigm shift. Multiculturalism is in its last death throes, and civic nationalism is increasingly unable to function where there’s no clear majority. Western nations are unable to stop accumulating unsustainable debts that can never be payed off. Our society is being torn apart from within by SJW’s who zealously believe things which are more absurd than any conspiracy theory I’ve mentioned and yet can also be debunked by mere casual observation and common sense. As they say, what can’t continue won’t. We may not know what we’re changing into, but we know we’re fundamentally changing.

On top of that, our hyper-elitist ruling class makes it incredibly easy to believe the worst about them. We expect them to lie & cheat, and we are not disappointed. We all pretty much assume that the scandals which make the news are only the tip of the iceberg. Even if you restrict yourself to completely open and mundane information, who can possibly look at people like the Clintons and say, “that all seems perfectly legit”?

And where are our investigative institutions? Journalism is in an absolutely atrocious state. Their monolithic ideological bias and frequent incompetence has decimated their credibility over the past few decades. And ever since the election, Trump Derangement Syndrome has made them look like raving lunatics to boot. As for our legal investigators, the CIA & NSA have always appeared pretty shady; and the veil being torn off the FBI lately has damaged its credibility beyond repair. Our academic institutions are likewise falling deeper into self-parody seemingly every day. We call this the information age, but in some respects, tracking down the truth has never been more complicated.

But when it comes to The Storm, the usual answer suffices: I don’t know. My skepticism naturally rises along with the outlandishness of any given detail, but I’d be lying if I claimed to have any real insight into what powerful people do with themselves all day. The usual answer also remains the pragmatic one. As a Christian, I already believe that Satan, though ultimately defeated, is still in a certain sense “the prince of this world” until the eschaton. How much does it really matter whether or not he uses a Cabal of rich and powerful occultists as his middlemen? While I would love to see any such people brought into the light and made to answer for their crimes, making it happen is not exactly in my wheelhouse—aside from prayer, of course, but I already do that.

A dragonslayer needs to know all about dragons, but that’s not who most of us are. Regardless of whether any conspiracies of this kind are true, most of our jobs remain essentially the same. We strive to be good fathers, mothers, husbands, and wives. We raise our children in the faith and defend them from harm. We serve our neighbors whom God has put in our lives. We exercise the small authorities given to us wisely. We honor the honorable and shun the shameful. And the truth of the matter is, if even most of us did these ordinary things faithfully, there wouldn’t be much power leftover for any Cabal to wield.

This entry was posted in Musings. Bookmark the permalink.